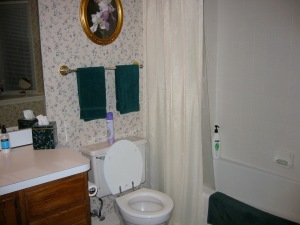 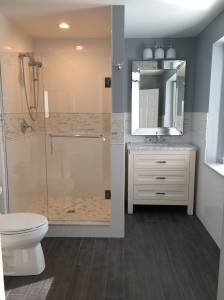 I have been looking forward to this bathroom remodel. The old bathroom had the same characteristics as my previous post (Main Bathroom Remodel: Renovating a Main Bathroom for a Mother and Daughter), dated appearance, faulty fixtures, cracking 4×4 inch tiles, etc. This project was an inspiration to “kick it up a notch” and design a space worthy of my favorite design sites and blogs.

I began where I always begin, with a sketch of how I envisioned the overall space. The current bathroom was a big square with a cumbersome bay window that jutted out over the front door below. The benefit with the bay window was that the light was plentiful, so I wanted to go big and grand. Carrera marble would be featured throughout, of course!

Being such a good sized space (12×12) for a home of this size, the area was sadly underutilized. A single sink base, toilet, standard shower/tub combination and that is it… all filled in with fillers and dead space.

My first and foremost consideration was to get a second sink in the bathroom so the couple could finally get ready and share the same space together. I investigated moving the toilet to the other wall near the window, but the cost in moving the plumbing and waste stack was not worth the cost. A logical solution was to install a second vanity in the space and now the couple could move freely and have their own areas to get ready. 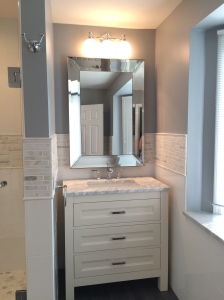 Designing a space with separate vanities is not a traditional choice. Admittedly, I consulted with a general contractor who was quoting another job for me and was the one who confirmed the design concept. Although I was sold on the idea, I had to convince the male homeowner that it would be a good alternative as he wanted double sinks side-by-side as they were a more traditional design choice. In the end, I showed him some examples of split vanities and he agreed.

The other major element was to remove the tub/shower combination and build out a big walk-in shower. Today’s designs incorporate glass on 2 or 3 sides to keep it open and bright – especially in a small space, but the client wanted something more enclosed and not so exposed. In the end we built a wall that separated the shower from the new vanity. The benefit was that I would be able to incorporate a detailed marble feature around and throughout the space. And to illuminate the new shower space, I added a light within the shower to ensure adequate light on darker mornings.

As for the design, I went with cool and bright colors…. Pallets of white and gray to play well together in the morning light coming directly from the East. It also was consistent with the other main bathroom on this floor (featured earlier), but completely different in design and execution.

The key design feature of the bathroom is the Carrera marble inlay that surrounds the bathroom on all sides. Carrera marble is cut into thick slats of various shades of gray and white affixed to a tile mat. They are laid directly onto the wall and cut in such a way that there isn’t a noticeable pattern as they are viewed on the wall. The change in the color is subtle and consistent.

The marble feature tile has been integrated into the shower and waterfalls into a large recessed ledge for soap and shampoo. It then weaves around the room and is only covered by the oversized beveled mirrors above the vanities.To be honest, it proved a big challenge for Ken and Mike to lay this tile out. In the end, it took more time than expected with variations in the tile and a lot of hand-applied patching to make it look perfect. Adding a pencil layer to complete the look above and below the marble surround, also proved time-consuming. But the results are dramatic and frankly, just beautiful. 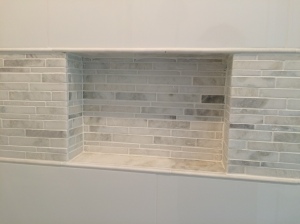 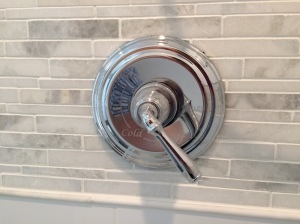 And regarding the shower floor, I used the same beautiful wall tile in the floor of the shower, but in an unique oval pattern…. It’s the same classic approach, but a completely different look — a nod to a contemporary feel with classic materials. The marble and the square shower drain complete the look.

One of the challenges with marble is to frankly, not over do it. Marble floor, marble walls, marble threshold, marble shower, marble countertops, ledge, etc. too much marble can turn even me off! Look at any design magazine or website and it can get a little out of control by those looking to make a really big visual splash.

Keeping that in mind, I cut the use of marble with bright white oversized wall tiles under the marble surround and within the shower stall on 3 sides. The oversized white porcelain tiles tone down the drama of the Carrera marble while adding balance with a clean, modern look. I also decided to go with a medium gray paint on the walls in a satin finish to give it a little glimmer and pop when the sun hits it on a bright morning.

Keeping in mind the need for the space to not be soooo traditional with all of the marble, on the floor I modernized the space by utilizing planks of dark gray porcelain tile that look like wood. Supported with dark gray grout, I wanted the floors to be more modern in look and feel and so it would appeal to the home owners’ transitional modern taste with a curtsy to classic overtones.

Layering is a technique that I use whenever I can. The feature wall marble inlay really carries the space throughout, covered selectively by the drama of the oversized beveled mirrors. Add in the polished chrome fixtures from Kohler and Pottery Barn, and the results are pretty darn spectacular, if I do say so myself! 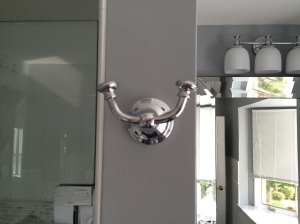 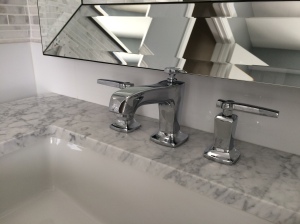 Overall, I set out to develop underutilized space and provide function with a spa-like retreat for the homeowners. I think the results speak for themselves and I hope you love it as much as I do!